Which of the following characteristics from James 1:19-20 best describes you and/or least describes you? If you excel at one or more of these, please don’t be bashful. Share with your group how you have become better at that or share what you feel you could work on:

A) Being quick to listen.

Not great at this when I am distracted.

B) Being slow to speak.

I am comfortable with speaking plenty, but speak slowly at times.

C) Being slow to become angry.

I am pretty good with this.

“My dear brothers, take note of this: Everyone should be quick to listen, slow to speak and slow to become angry, for man’s anger does not bring about the righteous life that God desires.”

The story of David and Abigail found in 1 Samuel 25 describes the potential harm that unmitigated anger can cause. Here David was deeply offended by Abigail’s husband and vows, in his anger, to avenge himself by killing Nabal and every male among his household. However, something happens that keeps David from sinning in his anger. If time allows, read 1 Samuel 25 or begin with reading verses 18-35 to discover what kept David from unleashing his wrath.

“Abigail lost no time. She took two hundred loaves of bread, two skins of wine, five dressed sheep, five seahs of roasted grain, a hundred cakes of raisins and two hundred cakes of pressed figs, and loaded them on donkeys. [19] Then she told her servants, “Go on ahead; I’ll follow you.” But she did not tell her husband Nabal. [20] As she came riding her donkey into a mountain ravine, there were David and his men descending toward her, and she met them. [21] David had just said, “It’s been useless—all my watching over this fellow’s property in the desert so that nothing of his was missing. He has paid me back evil for good. [22] May God deal with David, be it ever so severely, if by morning I leave alive one male of all who belong to him!” [23] When Abigail saw David, she quickly got off her donkey and bowed down before David with her face to the ground. [24] She fell at his feet and said: “My lord, let the blame be on me alone. Please let your servant speak to you; hear what your servant has to say. [25] May my lord pay no attention to that wicked man Nabal. He is just like his name—his name is Fool , and folly goes with him. But as for me, your servant, I did not see the men my master sent. [26] “Now since the Lord has kept you, my master, from bloodshed and from avenging yourself with your own hands, as surely as the Lord lives and as you live, may your enemies and all who intend to harm my master be like Nabal. [27] And let this gift, which your servant has brought to my master, be given to the men who follow you. [28] Please forgive your servant’s offense, for the Lord will certainly make a lasting dynasty for my master, because he fights the Lord’s battles. Let no wrongdoing be found in you as long as you live. [29] Even though someone is pursuing you to take your life, the life of my master will be bound securely in the bundle of the living by the Lord your God. But the lives of your enemies he will hurl away as from the pocket of a sling. [30] When the Lord has done for my master every good thing he promised concerning him and has appointed him leader over Israel, [31] my master will not have on his conscience the staggering burden of needless bloodshed or of having avenged himself. And when the Lord has brought my master success, remember your servant.” [32] David said to Abigail, “Praise be to the Lord, the God of Israel, who has sent you today to meet me. [33] May you be blessed for your good judgment and for keeping me from bloodshed this day and from avenging myself with my own hands. [34] Otherwise, as surely as the Lord, the God of Israel, lives, who has kept me from harming you, if you had not come quickly to meet me, not one male belonging to Nabal would have been left alive by daybreak.” [35] Then David accepted from her hand what she had brought him and said, “Go home in peace. I have heard your words and granted your request.”

1. What qualities in Abigail stand out to you in these verses, particularly as she deals with David’s anger?

“In your anger do not sin” : Do not let the sun go down while you are still angry, and do not give the devil a foothold.”

In this story of David and Abigail, do you think David’s anger and his plan to act on his anger was justified or wrong?

His anger was not wrong, but his action plan was.

Why or why not?

He was taking the law into his own hands and turning an offense into vengeful murder.

3. According to Abigail, what would have been the sin David would have committed, if he followed through on his anger? (see vs. 31).

[31] my master will not have on his conscience the staggering burden of needless bloodshed or of having avenged himself. And when the Lord has brought my master success, remember your servant.”

“Do not take revenge, my friends, but leave room for God’s wrath, for it is written: “It is mine to avenge; I will repay,” says the Lord.”

4. What stands out to you about David’s response to Abigail in verses 32-35?

[32] David said to Abigail, “Praise be to the Lord, the God of Israel, who has sent you today to meet me. [33] May you be blessed for your good judgment and for keeping me from bloodshed this day and from avenging myself with my own hands. [34] Otherwise, as surely as the Lord, the God of Israel, lives, who has kept me from harming you, if you had not come quickly to meet me, not one male belonging to Nabal would have been left alive by daybreak.” [35] Then David accepted from her hand what she had brought him and said, “Go home in peace. I have heard your words and granted your request.”

He did not want the sun to go down while he was still angry, but in a different way than I would have expected.

How might he have been shaped and significantly changed by his encounter with Abigail?

He was presented with something else that was important to him, being right with God. the wisdom of remaining free of blame in his conduct.

5. After comparing the responses of Abigail and David to the situation they were dealing with, consider the times when you have significant disagreements with people in your life, or marital conflict that leads to fighting. Who do you tend to be more like: Abigail (the voice of reason) or David (avenging yourself, easily angered, and eager to fight)?

Neither, I guess. Or a little of each. I usually want to do whatever works for the long run. I don’t think of myself as being hot tempered, but I am not very accommodating (as Abigail) to the roller coaster of feelings in others either.

6. What steps do you think you can take on the spectrum of anger to move more towards an attitude like Abigail’s and one that is less like David’s?

Pray for those who are offended to diffuse the emotional motivations for others wanting to exact justice.

TAKING IT HOME
Anger is often called a secondary emotion because we tend to resort to anger in order to protect ourselves from or cover up other vulnerable feelings. A primary feeling is what is felt immediately before we feel anger. We almost always feel something else first before we get angry.
As the drawing below illustrates, anger is like an iceberg, in that only some of the emotions are visible. The other emotions exist “below the water line” where they are not immediately obvious to outside observers. 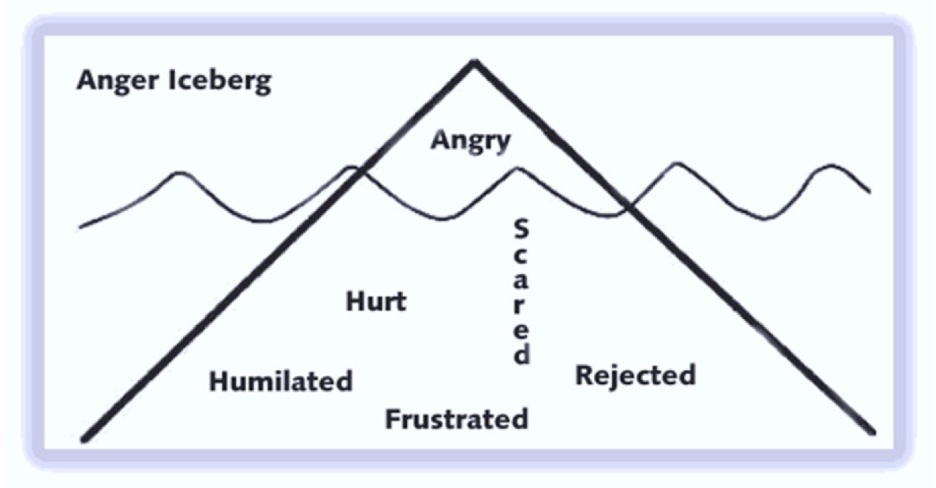 As you think about the, “Anger Iceberg”, what emotions below the water line do you think lead to your own anger at times?

When you and your spouse fight, or when you find yourself angered by a disagreeable conversation with a friend, family member, or co-worker, which underlying emotion might be hiding just beneath the surface, undetected by others, and perhaps even undetected by you?

I likely feel ignored or my effort was wasted and my motives and values were insulted. I guess I could call that emotion ‘offense’.

Spend time this week asking God to help you see below the water line. Once you are willing to deal with that primary emotion, offering it to God, and being accountable to others, there is a good chance that your anger, and the unfair fighting that might result from it, will decrease.