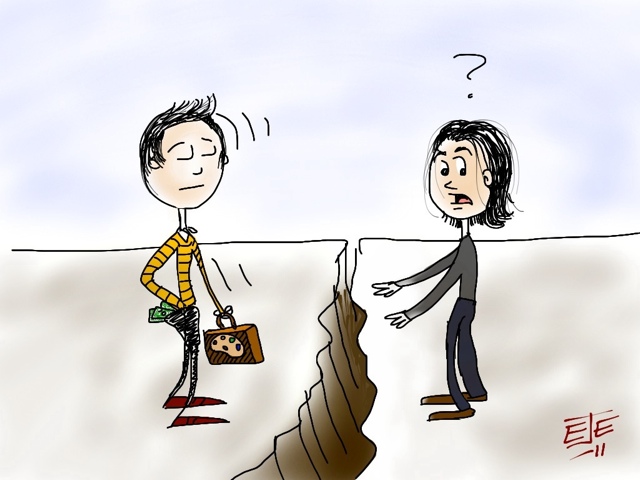 This really bothers me. A guy that I knew asked me to draw something for him for a project he was working on. I told him I would do it for 2/3 of my normal rate, because he was a buddy of mine. Then, after a few revisions, when he was satisfied with the result, I invoiced him for the money, he said that he was going to pay me after his client paid him. Now, I didn’t sign up to be a partner in his business. I just was going to do something for him for a price that we agreed on and he’s been promising, then flaking on me for almost two years now. I don’t know what to do anymore. His client never payed him so he changed the terms on his own. I guess it was a lesson in life that some people won’t do what they say when things don’t work out for them. They pass on someone else’s flakiness and pretend like it doesn’t have anything to do with them. I think that if I were to want to have some sort of partnership where I shared in the risk with somebody else that was helping me out then I should also share the reward and not be saying here’s a flat rate for what you’re doing rather than a percentage of profits and explain the risk before hand. I don’t want this to happen again, because it turned a mutually respectful acquaintance into something like tense silence. I like to think that my relationships are worth more than that, and it is sad to see one sold so undervalued. I may need to request that a lawyer draw up some concise contracts for me to use in the future, because one day I may really need a paycheck to pay my bills and live on, and have contracts with higher stakes that I can’t afford to lose.

I have been thinking alot about drawing and the creation of art in general recently. When I go to work and come home, eat and sleep and socialize with wife, kids and friends, I am reminded about some of the unique talent I have and have not been really using as much as I should. I have a lot of fine art supplies in the garage, but they are dried up and corroding. I need to develop my skills again in the digital realm, so that I can get back to progressing creatively and find my way back to making my business profitable. I have invested plenty in my business, and now it is time to promote it and make some money in the process.